Ecology and electricity generation can go hand in hand. Modern technology allows for the production of energy without the use of fossil fuels harmful to the environment and human health. A piece of the roof is enough to install an ecological energy system. Photovoltaics is becoming more and more popular among buyers, because it is energy obtained from a free and basically inexhaustible source, which is the sun. There is still a long way to go to the massive use of solar energy in Poland due to the reluctance to ecological energy sources among political elites associated with the mining industry.

How much energy does a photovoltaic system produce? 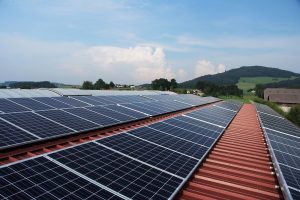 This is difficult to determine as there are several suppliers of PV systems on the market .   Information about a specific model should be found on the manufacturer’s website or ask a consultant. More important than assumptions is the actual operation of the photovoltaic system. In order to produce the maximum power per square meter, the panel must be well designed, i.e. withstand the temperature difference optimally, and also be able to adapt to the spectrum, incidence angle and amount of light. The heat comes from the sun’s rays. However, if the panel is too hot, its energy efficiency decreases. The above situation may occur if the temperature is higher than 25 degrees Celsius. The most modern panel models have a low temperature coefficient of resistance – that is, a heat-related energy loss that minimizes heat-related energy losses. As a result, energy production losses related to high temperatures are minimized.

There is a widespread belief that photovoltaic systems are less efficient on cloudy days. People who provide such information forget one thing – light is not only what we see, but also a spectrum of waves invisible to the human eye, e.g. infrared or ultraviolet. Clouds can block the visible light spectrum, but do not block the entire spectrum. The best photovoltaic systems take more infrared and ultraviolet light than visible light, which allows the energy needs to be met. Most solar panels are built with anti-reflective glass, which sends the rays more to the photovoltaic cell to produce the maximum amount of energy.

The price of the photovoltaic system

The prices of photovoltaic systems have dropped by several percent in recent years. It is related to greater customer interest. The energy generated by the photovoltaic system can be used to heat water in a central heating installation and to power electrical devices, such as: refrigerators, washing machines, TV sets, laptops, mixers, etc. The basic element of the photovoltaic system are panels made of individual cells connected into modules. Solar cells, in turn, are made of silicon, which allows electricity to flow and produce. An additional element is a special frame for solar cells consisting of: tempered glass, anti-reflective coating and an aluminum frame. INthe photovoltaic system produces direct current, and alternating current flows in household sockets, it is necessary to install an inverter that adjusts the type of energy to that needed in the installation. Its cost is PLN 5,000. Panels and design are the most expensive. Other costs borne by the customer are the purchase of mounting elements and cable accessories, DC / AC protection. After installing the system, it is necessary to measure the installation electrically. The customer also pays for the installation by a professional company, because installing the photovoltaic system yourself may void the warranty. The average cost of the installation (5 kWp) ranges from PLN 27,000 to 33,000 and approximately PLN 19,500 for a 3 kWp installation. As part of the “Clean Air” program, you can get a low-interest loan for purchase and installationphotovoltaic system. Co-financing photovoltaics is also a tax relief, known as thermomodernization. Under the “My Electricity” program, you can receive a subsidy of PLN 5,000 for photovoltaics. Photovoltaic systems are cost-effective despite significant set-up costs. Energy prices are rising. It is possible to send excess energy to the utility company and collect it during the year. The durability of photovoltaic systems is estimated to be 25 to 45 years. The greatest benefit of photovoltaics is the feeling that you are using clean energy.

The dream of environmentalists is that photovoltaics should be commonly installed in single-family and multi-family housing, as well as on the roofs of halls and industrial plants. According to experts, the above dream may come true quickly as there is a growing interest in renewable energy sources. Poles want to pay less for electricity and become independent from monopolists – large energy companies. Greater environmental awareness also contributes to the growing interest in green energy.

When is it worth using the help of a detective?